After a round of pandemic-related gains a year ago, Grocery Outlet Holding Corp. returned to a sales growth path in the first quarter of fiscal 2022.

For the quarter ended April 2, net sales totaled $831.4 million, up 10.5% from $752.5 million a year earlier, while same-store sales increased up 5.2% year-over-year, Grocery Outlet reported yesterday after the market closed. That compares to declines of 1% in net sales and 8.2% in same-store sales in the first quarter of 2021.

The Emeryville, Calif.-based value grocer, however, noted that comparison store sales rose 14.3% over a three-year stack, spanning the period since the onset of COVID-19.

“We are very pleased with our performance in the first quarter and the continued advancement of our long-term growth strategies. We delivered strong topline growth, with same-store sales growing 5.2%, well above expectations,” Grocery Outlet CEO Eric Lindberg told analysts during a briefing. conference call Tuesday evening.

CEO Eric Lindberg said Grocery Outlet saw “increasingly positive” traffic and ticket trends throughout the first quarter, and the momentum is continuing into the second quarter.

“While average ticket was the primary driver of competitive growth, we saw increasingly positive traffic trends year over year throughout the quarter. Traffic also increased sequentially by compared to the fourth quarter,” Lindberg explained. “The momentum in our business extends into the second quarter, with continued strength in traffic and tickets, further confirming our belief that consumers are increasingly prioritizing the Our supply pipeline remains strong and our IOs [independent owner-operators] are excited about the positive trends in the company. We are making continued progress on our new initiatives to expand customer reach and increase share of wallet in e-commerce, SKU expansion and our mobile app development.

In late October, Grocery Outlet unveiled a 68-store online grocery delivery pilot with Instacart in California, months after the retailer revealed it was in talks with potential e-commerce partners. Then last month, the retailer said it had expanded same-day Instacart service to nearly 400 stores in California, Oregon, Washington and Pennsylvania.

“When it comes to e-commerce, we remain excited about the long-term potential of this initiative,” President RJ Sheedy said on the call. “Following the positive results of our Instacart pilot, we have recently completed a rollout to almost all of our stores, and although it has only been a few weeks since the rollout, we are pleased with the smooth execution and favorable response from IOs and customers so far. Also, later this quarter, we will be launching a pilot project with [delivery] partners in the same 68 stores that were part of the Instacart pilot, allowing us to expand our customer base even further.

So far this year, Grocery Outlet has added more than 175 new SKUs, in addition to the 275 new items launched in the second half of fiscal 2021, according to Sheedy.

“We remain pleased with customer response to the new everyday items we’ve added since last year,” he said. “For the remainder of this year, we plan to grow our new SKU count by another 150 as we strive to provide a more comprehensive store, greater convenience and value to our customers on a consistent, daily basis. In terms of target items, we remain focused on growth categories such as NOSH [Natural, Organic, Specialty, Healthy]fresh, ethnic and local.” 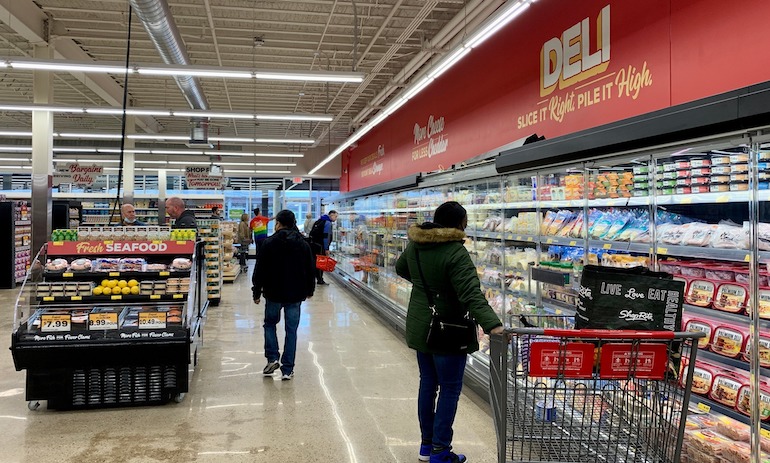 As part of an ongoing SKU expansion, Grocery Outlet has added over 175 new items so far this year.

Grocery Outlet is also making great strides in its personalization initiative and is on track to pilot its mobile app this summer, Sheedy noted. “We’re excited to extend the scavenger hunt experience beyond the four walls of the store and further tailor our customer messaging,” he said. “This program will provide our customers with real-time visibility of articles on valuable offers and allow us to personalize our communication according to their preferences.”

“We remain on track to open 28 net new stores during the year, including approximately 10 stores in the Mid-Atlantic region as we expand our footprint in the East,” Lindberg said. “The challenges we discussed on our last call regarding labor and material shortages, as well as longer lead times, lease enforcement and site permits, continue to persist. However, based on our pipeline of already approved transactions and identified potential sites, we expect to return to 10% unit growth from 2023. In the meantime, we remain satisfied with the performance of new stores across all markets, including recent vintages, as they continue to grow in line with our underwriting expectations.

Analysts, on average, had expected first-quarter adjusted earnings per share of 20 cents, with estimates ranging from 18 cents to 23 cents, according to Refinitiv.

Looking ahead, Grocery Outlet has improved its outlook for fiscal 2022, with adjusted earnings per share now projected 94 cents to 99 cents, from 92 cents to 97 cents previously. Wall Street’s consensus estimate, before the analysts’ call, was for adjusted EPS of 95 cents, with a range of 92 cents at $1.01.

“Based on the first quarter outperformance and the strong trends since the start of the quarter, we are raising our full-year revenue and earnings guidance,” Chief Financial Officer Charles Bracher said during the call. “We are increasing our range of full year offsetting sales from 5.5% to 6.5% [from 4% to 5%], an increase of 150 basis points compared to the previous forecast. In terms of new store openings, we remain on track to open 28 net new stores in 2022, with the majority of stores opening in the second half. Due to our higher compensation expectations, we are increasing our FY2022 sales guidance range from $3.39 billion to $3.42 billion [from $3.33 billion to $3.38 billion].”

Subscribe Be the first with news that moves the market Western Australian gold explorer Lodestar Minerals (LSR) raises $2.78m via oversubscribed placement A total of 347.5 million fully paid common shares were placed primarily with professional and sophisticated investor clients of Canaccord Genuity and Euroz Hartley at 0.8 cents Lodestar will use the money to […]

Costco reports 16.7% increase in net sales for the first quarter of FY22

Costco operates 828 warehouses around the world. Credit: Open Grid Scheduler / Flickr. US-based retail company Costco Wholesale has released its results for the first quarter (Q1) of fiscal 2022 (FY22), which have exceeded analysts’ expectations for both earnings and revenue. For the three months ended Nov. 21, the company’s net sales rose 16.7 percent […]