With pandemic-related results now cycled, Albertsons Cos. saw a return to growth in its first quarter of fiscal 2022 with strong net same sales gains.

For the 16 weeks ended June 18, net sales and other income were $23.31 billion, up 9.6% from $21.27 billion a year earlier, when the figure revenue fell 6.5% year-over-year, Albertsons said on Tuesday. The Boise, Idaho-based grocer attributed the rise in sales to high identical (ID) sales and higher fuel sales, noting that retail price inflation boosted ID sales.

“This puts us in a strong position to continue executing our ‘Customers for Life’ strategy.” — Vivek Sankaran, CEO of Albertsons Cos. (photo courtesy of Albertsons)

“In the first quarter, our teams continued to deliver strong operational and financial performance across all key metrics, and we continued to gain market share,” said Albertsons Cos CEO. Vivek Sankaran in a statement. “As we look forward to the remainder of the year, as we reflect on the macroeconomic environment and possible implications on consumer behavior, our teams have consistently demonstrated their ability to adapt to a changing environment over time. This puts us in a strong position to continue executing our “Customers for Life” strategy, including engaging our customers more deeply both digitally and in-store and delivering on our productivity agenda. the resilience, agility and passion of our teams and their continued service to our customers and communities.

Also on Tuesday, Albertsons provided an update on the company’s “strategic alternatives review” announced in late February. The retailer said it hired a third party to appraise its real estate portfolio, and the appraisal pegged the value of its owned and leased properties at $13.7 billion, up from $11.2 billion in 2019.

Albertsons also reported that it had extended a lock-up agreement with five of its major shareholders (Cerberus Capital Management LP, Kimco Realty Corp., Klaff Realty LP, Lubert-Adler Partners and Jubilee Limited Partnership) until September 10, as the pact was due to expire on June 30. Under the agreement, each sponsor has agreed to restrictions on its ability to offer, sell, transfer, contract to sell, pledge or assign common stock of Albertsons Cos. during this period, which extends through the end of the Company’s second fiscal quarter 2022. Together, the five sponsors own approximately 366.04 million common shares, or approximately 69%, of Albertsons’ approximately 531.59 million shares outstanding.

No timeline has been set by the Albertsons board for the strategic review. When announcing the action in February, the company said it had retained Goldman Sachs and Credit Suisse as financial advisers for the review, which will assess balance sheet optimization and capital return strategies, potential strategic or financial transactions and the development of other strategic initiatives to complement Albertsons’ existing businesses. The retailer said the review will also involve “responding to inquiries”.

In her report on Albertsons’ 2021 fiscal year in April, chairman and chief financial officer Sharon McCollam told analysts the company believed it was undervalued relative to its competitors. 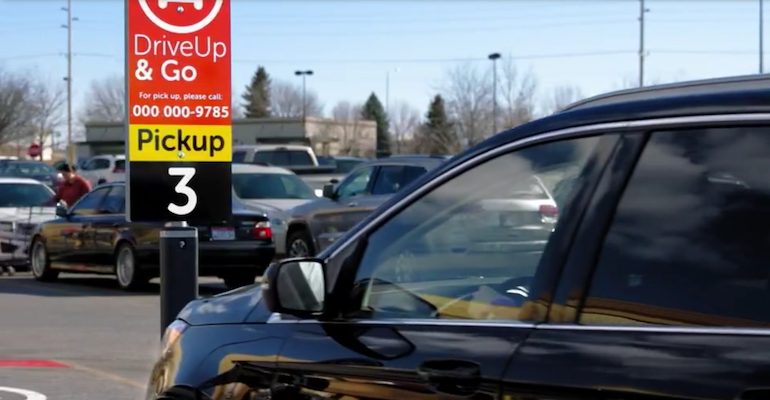 Online sales jumped 28% in the first quarter, compared with flat results from the pandemic-fueled earnings cycle a year earlier.

“It was really triggered by the fact that the valuation relative to our peers didn’t reflect the strength of our performance, and we had reasons for that,” McCollam said on a conference call at the time. “We outperformed Kroger in the fourth quarter, we outperformed them on the year, etc. So that was really, originally, the catalyst for us,” she explained. “And of course there was the preferred stock overhang that hit the market and then the IPO crash that was coming.”

Analysts, on average, had forecast Albertsons’ first-quarter 2022 adjusted earnings per share at 92 cents, with estimates ranging from 79 cents to $1.11, according to Refinitiv.

Albertsons estimates that identification sales will grow 3% to 4% for fiscal 2022, up from its earlier forecast of a 2% to 3% increase. Capital expenditures remain in the $2 billion to $2.1 billion range.

In the first quarter of 2022, Albertsons’ capital expenditures totaled $613.8 million, primarily driven by investments in digital and technology platforms and store upgrades, including 27 renovations.

Egypt set a fixed price for unsubsidized bread to counter rising food prices after Russia’s invasion of Ukraine closed access to cheap Black Sea wheat. Prime Minister Moustafa Madbouly on Monday set the price for commercial bread at 11.50 Egyptian pounds ($0.66) per kg, his office said in a statement. Food prices had risen in […]

BillerudKorsnäs sees net sales increase by 75% in the second quarter

Swedish pulp and paper manufacturer BillerudKorsnäs recorded a growth in its net turnover of 75% in the second quarter of its fiscal year to 11.4 billion SEK (1.1 billion euros). Net sales excluding currency effects increased by 72%, mainly due to the acquisition of Verso, which was completed on March 31, 2022, the company noted. […]